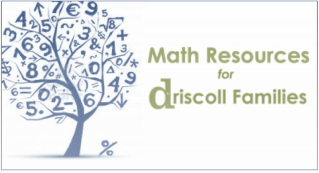 First published in 1968, Ten Black Dots is a counting book, a book of simple rhymes, and a book of everyday objects. 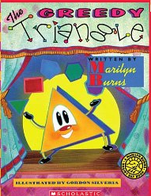 Bored and dissatisfied with his life, a triangle visits a local shapeshifter to add another angle to his shape. Poof! He becomes a quadrilateral. But then he gets greedy and keeps adding angles until he's completely transformed. Kids will enjoy this boldly colorful introduction to shapes and basic math concepts. 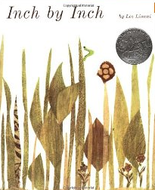 In this classic book, a winsome, winning inchworm is proud of his ability to measure anything under the sun. 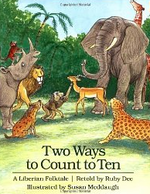 A clever tale about the jungle beasts learning to count, showing once again that being strong is not the same as being smart. 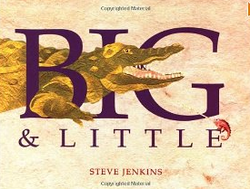 A gorgeously illustrated book that shows animals that are related to each other but vary greatly in size. All animals are illustrated on the same scale, so readers can compare them throughout the book. 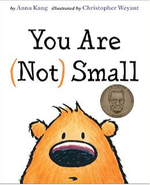 You are (Not) Small
by Anna Kang, illustrated by Christopher Weyant (Amazon)

Two fuzzy creatures can't agree on who is small and who is big, until a couple of surprise guests show up, settling it once and for all!

The simple text of Anna Kang and bold illustrations of New Yorker cartoonist Christopher Weyant tell an original and very funny story about size—it all depends on who's standing next to you. 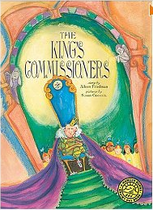 A confused king has appointed a commissioner to handle every problem in the kingdom from flat tires to chicken pox. Now he has no idea how many commissioners there are, and he orders his royal advisors to gather and count them as they walk through the door. The first advisor counts by twos, the second by fives, and the little princess by tens. Of course, they all arrive at the same answer. The king is utterly perplexed, but his daughter clears up the mystery and readers learn the value of multiplication. Guevara combines cartoon and primitive styles to create zany, exaggerated, brightly colored illustrations?the perfect complement to the silly story. The portrayal of the simpleminded king is especially amusing. The story is appropriate for whole-language units, home-schooling, or for anyone who wants to show the fun and useful role of math in everyday life. 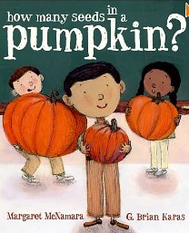 How Many Seeds in a Pumpkin?
by Margaret McNamara, illustrated by G. Brian Karas (Amazon)
Call Number: jP McNamara

This versatile and sincere story will teach math and science concepts while modeling kind behavior. When Mr. Tiffin brings three pumpkins into class for a math and science lesson, all the children guess how many seeds are inside. Charlie, the smallest kid in class, feels frustrated: "All the best guesses are taken." Then the class opens the pumpkins and counts the seeds. McNamara introduces the concepts of counting by twos, fives, and tens, and she includes pumpkin facts (the more lines on the pumpkin, the more seeds it will have). Charlie ends up with the correct guess and discovers that "small things can have a lot going on inside them." Karas' simple, effective illustrations, in the autumnal colors of a fall landscape, capture the multicultural students' feelings, especially Charlie's quiet confusion and eventual flush of pride and confidence.

How Big is a Foot?
by Rolf Myller (Amazon)
*not available at Brookline Public Library; may be requested from another location. See front desk for details.

The King wants to give the Queen something special for her birthday. The Queen has everything, everything except a bed. The trouble is that no one in the Kingdom knows the answer to a very important question: How Big is a Bed? because beds at the time had not yet been invented. The Queen's birthday is only a few days away. How can they figure out what size the bed should be? 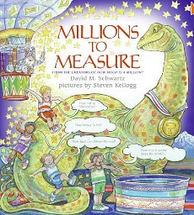 Marvelosissimo the Mathematical Magician is back -- and ready to explore the invention of length, weight, and volume measurements. After that, with another wave of his wand, the wizard introduces the world of metrics and makes it easy to understand the basic pattern of meters, liters, and grams. With Steven Kellogg's playful and delightfully detailed illustrations, measuring has never been such a blast! 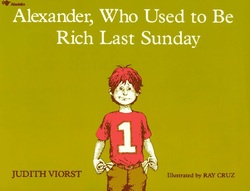 Last Sunday, Alexander's grandparents gave him a dollar -- and he was rich. There were so many things that he could do with all of that money!  (Book originally published in 1978.)  He could buy as much gum as he wanted, or even a walkie-talkie, if he saved enough. But somehow the money began to disappear...

Check out some ideas about how to spotlight the math here.
Note: as stated, this book was originally published in 1978.  How could we update it for 2013?